The cool thing about being human is the constant opportunity to renew yourself. I was telling my "story" the other day to an interested party, and was again struck by all the shit that's happened over the past three years. Not all of it has been literal shit, but a lot of it was, and you know what? I'm using that as fertilizer for the good stuff that's coming my way.

Among the break-ups and my sister dying, and the 7 months of cardiac drama I went through, and fighting to get through school, and more break-ups, and association drama, and gaining 40 pounds, I figured that life was pretty much over, right? Nope!

I finished my MSN. I bought a home that's everything I ever wanted. I'm going back to school next month for my Clinical Nurse Specialist certification. I'm heavily involved in planning my first vacation in four years. I've discovered yoga and Pilates and meditation and renewal. I've started down the path to adopt a child, and will have the second phase completed in late June. I've made lifelong friends who have become my extended family. I've become closer with my parents. I've lost 10 of those 40 pounds.

I chose to eliminate coffee, alcohol, and most processed foods. I journal every night and every morning in the "5-minute journal" that I received at the SHARP Women's Health Conference in April. I've made self-care a priority for the first time in years. I have released my painful desire to be in a relationship, as I realize I can't be a functional part of a duo if I am not in love with myself.

That's my current journey. Finding my love for myself. I believe in romance, and that head-over-heels love that you read about and see on the faces of your Facebook friends when they post photos of their weddings and engagements. I am glad to know it exists. I may never find it for myself, but I'm at peace knowing that it does exist in this world. I am filled with the love I have for my family and friends, and thrive on the hugs and laughter and silliness that we share.

On another note, we're surrounded with so much STUFF, right? If love is so fulfilling, why do we have so much STUFF. We're covered in THINGS... even now, I'm surrounded by sofa pillows. Why do I need 7 sofa pillows? Earlier this month, I was in Sacramento at RN Day at the Capitol. I was introduced to several of the people there who were homeless. I was struck by their stories, the humility they show as they face such adversity that most of us would probably be a total  mess. One little lady was surrounded by umbrellas as she slept in the shade. She used one as a "gate," between her and a nearby planter, protecting her valuables from curious fingers. When I returned to her, bringing milk and pudding per her request, she presented me with two paper boats. I was immediately humbled that this woman, who has so little, took the time to make me these boats and then educate me on how they should be used.

I credit her for transforming my perspective on just about everything. We have a lot, if we just know how to look at it. 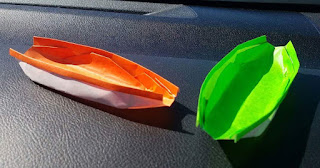