I haven't been camping in more than 4 years. Not because I haven't wanted to, but because of time schedules, school, work, family, The Man moving in, sharing of vehicle, that thing called money (Thing formerly known as money? Oh, that's my bank account.)

I loved to camp at Lake Cuyamaca near Julian, which is outside of San Diego. Julian is known for apple pie. It is also known to the Girl Scouts as CAMP! I developed a love for camping at an early age, when I went to summer camp at Camp Winacka. Horseback-riding camp was my favorite.

I loved being close to the horses, their soft, warm breath foggy in the early morning hours as we mucked out their stalls. I loved sneaking them apple slices from lunch, feeling the suede-like mouths move over my hands. I whispered secrets into their large ears, and received nodding responses in return. They kept my secrets. I've kept their love for all these years. At a time in my life where humans were confusing to me, these strong, dignified animals made sense to me. 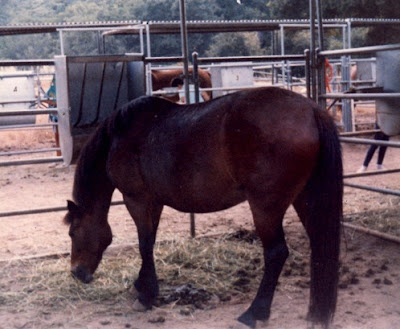 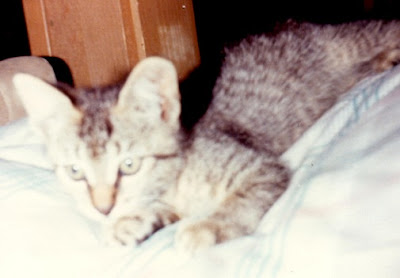 And meet "Rocky", the camp kitten who liked to sleep on my pillow.
﻿
I digress....

Lake Cuyamaca is an interesting place; depending on the amount of rain we get, the lake can be very small, or immense, crossing over the footpath leading to the peninsula. The waters can vary in color, from a deep indigo after a fresh rainfall, to more of a murky green from the algae and grasses living in the bottom. I love it all.

The fires in 2003 broke my heart when they ravaged this area. Enormous, gorgeous green trees were black, rotting stumps in seconds. The mountains and hills were black and brown rubble. Animal life ceased to exist for quite some time, having nothing to eat and nowhere to hide. Homes, memories, and lives were lost. 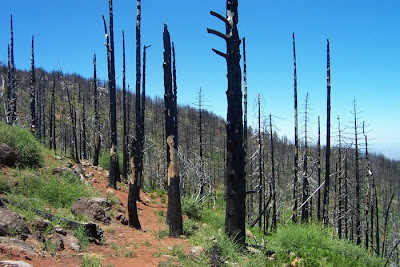 I returned to the area during a rough time in my life. I initially drove up for the day, and sat with my journal and camera by the Lake, writing some, but mostly staring off into the distance. I watched the clouds roll in and out, the ground squirrels chattering to each other, the long lines of ants making their way to wherever. I listened to the sound of the water splashing against the dock. I sat there for hours. I felt as if I had found my way home.

A couple of weeks later, I went back and stayed overnight, in the back of my truck. It wasn't true. So a few weeks after that, I bought camping gear and returned "for real".  I set up my tent, my camp stove, my chair, and brought out my flashlights and things that I would need for night. I set off on a hike around the peninsula, and was overjoyed to find a labyrinth. When I found it, it was completely covered in wild grasses, unfinished, and seemingly abandoned. I sat for hours in the center, feeling the wind and the energies around me. I was filled with a searing sense of "self". I returned to this place several times over the next few days.

I was shut off from the television, radio, and almost all phone contact, as cellular service in that area was not very good. I was in heaven. I missed my cats like mad, however I knew they were in good care, and would be understanding of my need to resurface my soul.

I went camping many times after that, and would often search out new spots. However, no spot seemed to be Home, like the Lake was. I would spend hours wandering the area, watching fathers and sons fish on the lake in tiny aluminum boats, and would share my flashlights with the giggling groups of high-school campers who had forgotten theirs at home. I would listen to the chittering of raccoons as they passed by my campsite, and would hear coyotes howling in the distance. I would look at the stars pass over through the roof of my tent, and relish the soft glow of the Milky Way.

One evening, I sat on a table overlooking the lake. The fog began rolling in, in strange patterns, tubelike, over the water. The sun was able to sift through the murky grayness from time to time. I was able to capture a moment that will forever be captured in my heart and mind. (All I did was darken the photo. No color was added, and nothing else tampered with.) 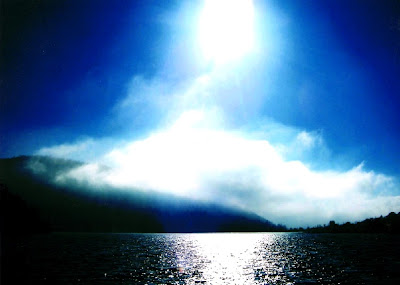 Do you see my Guardian Angel at the top?
Posted by Unknown at 6:31 PM