Once a upon a time, there were two sparkly unicorns. Their names were Fluff and Softy.

"Fluff"                                "Softy"
(Obviously, you can't tell how fluffy and soft they are because they're sparkling like mad. Blinding, even. I mean, the glitteriness of these two makes your head want to spin around. Especially "Fluff". Her golden awesomeness is like taking a Bedazzler straight to your eyeballs. Forget about punching gems into your favorite Levis. This is right at the source.)
Anyways, Fluff and Softy were having a great day flying around in the clouds. Fluff's wings had been accidentally glitter-painted to her sides, but Softy was able to pull Fluff around in a red wagon. (Softy is pretty buff for a tiny little pink pony-unicorn.)
Backstory to their happy flying-ness, Fluff and Softy had been recently freed from their hiding spot in the Pocket of Protection. It was a fortress, really. See, there was a riot earlier in the day; someone had left their restaurant leftovers tucked away in one of the clouds, and the stupid Earthly seagulls had found it, and were just going mad in a frenzy. 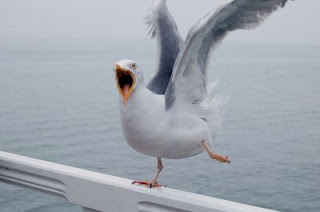 That pad-thai is delicious, yo.
Fluff and Softy had galloped into the Pocket of Protection at a full rate once the Seagulls had become rather unhinged and squawky. They were unaware of the wonders they would find there.
Softy skidded on something (it was dark, she had no idea what it was, and didn't really care to find out) and landed in a pile of something marvelously cushy. "What is this magical stuff!" she said to Fluff. Fluff replied, "Softy, I don't know, but it is luxurious and I could just spend all day rolling around in it."
(What the sparkly unicorns didn't realize, but of course you and I do, is that this Pocket of Protection was filled with pocket lint. That spectacular, mysterious, enchanting, squishy stuff that seemingly appears whenever you need to dig change out for the parking meter.) 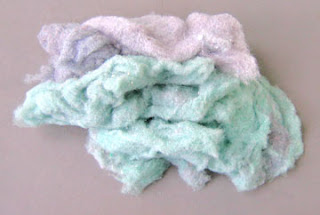 Rainbow colors, even!
Fluff and Softy hung out in the Pocket of Protection for several hours, frolicking in the lint and listening to the madness happening outside. "Wow, Softy," said Fluff, "Pad-Thai must have some addictive qualities to it. Listen to those silly Seagulls losing their feathers over it." (Yes, Fluff, yes it does.) They were lucky that these were Pad-Thai Seagulls, and not Unicorn Seagulls. The Unicorn Seagulls had attacked the cloud-colony earlier that year... 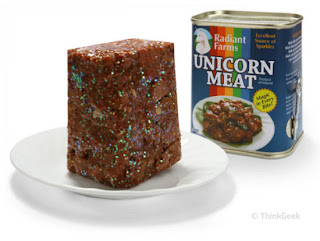 The two sparkly unicorns soon became hungry from all their frolicking and bounding and leaping. Amazingly, they found a corridor within the Pocket that led to a sweet shop and bakery. Fluff looked at Softy. "Uh-oh. This could be dangerous." Little did they know the wondrous properties of sugar. 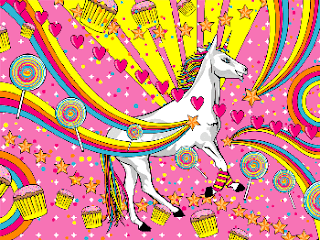 OMG OMG OMG!!!!!!
Fluff and Softy ate so much candy and so many cupcakes that they were soon radiating rainbows and hearts and stars. The space-time continuum began to slow down and seemed to reverse. Fluff ran in circles over and over and over, until Softy mewed at her to slow down... "Fluff, you're making me dizzy!" Fluff squeaked back, "No, Softy, that's just the swirls on your lollipop! Must go faster!"
Rainbows and glitter streaked out of the Pocket of Protection, effectively scaring the Seagulls away from their prize. Pad-Thai rained down outside the cave as the Seagulls flew screaming into the night sky. Fluff and Softy collapsed in the pocket lint in exhaustion as the sugar-high mellowed out. They soon fell asleep to dreams of marshmallow clouds and magical fairies.
Thanks to @cherokeegirl74 for the conversation which led to this craziness. ;-)
*****************
Photo credits
*****************
Gold unicorn: hitgypsy.blogspot.com
Pink unicorn: mockduck.net
Unicorn meat: coldfusion-guy.blogspot.com
Rainbow lint: roger-russell.com
Seagull: leticiatrigo.blogspot.com
Candy unicorn: sodahead.com
Posted by Unknown at 1:17 PM