I thought the last blog topic was bad enough, but this one is even tougher. *Sigh* I'm going time-traveling for this one, as I think the music I listen to now is just fine by current standards.

"Declare your love for an uncool band."
(from 30 Days of Shamelessness, as posted on My Tornado Alley.)
Ready? 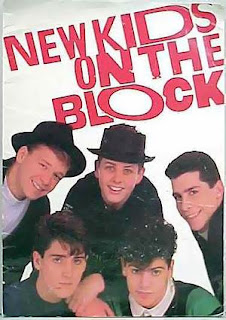 Aw, go ahead. Laugh. Laugh all you want to. Little do you know how awesome they were back in 1990. And how my friend and I even flew to Detroit to see them in concert. Twice.
You don't know that my other friend and I had contests as to how much New Kids crap they could pin to their walls. I wasn't allowed to use pushpins on my newly painted (hot pink, oh yes) walls, so y'all should have bought stock in Scotch Tape back in 1990. Because I used about 25 rolls of the stuff that year. Actually, probably in about a month. Did you also buy stock in Teen Beat and BOP magazine? Frickin' embarrassing, really. The trees we killed for our own visual pleasure.
I knew people with the bedsheets and comforters, and pillowcases, and T-shirts, and pins and keychains, patches, jackets, beachtowels, books, jewelry and shoelaces. I know I had some of these, I don't remember exactly what. Definitely not the bedsheets. I draw the line at faces on my sheets, ever since my childhood nightmares with Raggedy Ann and Andy sheets. Those eyes glowed in the dark and messed me up.
I had cassette tapes (for those of you born after 1987, those are these little rectangle things that have thin strips of plasticy stuff, and music magically plays when you put these rectangles into a thing called a Walkman.) My friends and I played these things until the tapes snapped and we, in a panic, tried Scotch-taping them back together, which didn't work really well, so we just went out and bought new ones. I know I had most of their albums. Even the Christmas one. "Little Drummer Boy" was my favorite.
Those were the days where we made our own mix tapes off the radio, too. Call in on a Sunday morning and make dedications? Yes, that was us. We were obnoxious.
It still trips me out to see Donnie Wahlberg on the big screen as an actor. I'm used to him rockin' that weird side-to-side dance move to "The Right Stuff". Joey McIntyre will forever be 14 years old. Danny Wood will be Mr. Buff. Jordan Knight will always have that gorgeous falsetto that was laughed at endlessly by people who just didn't get the romance. And Jon Knight, that sweet, shy boy, will always be up there at the top of my celebrity teen-crush list.
Posted by Unknown at 8:34 PM