Why do I want to be a hospice nurse?

I'm asked this question a lot. Many people are concerned with me going into a career that involves so much death. These same people don't seem to realize that hospice involves a whole lot of Life, too.

I was originally going to school to work on my kinesiology degree so that I could get personal training certification and help people to live healthier lives. I had been through a lot with my own health, and I wanted to be there as a cheerleader and coach for people who wanted to follow their own path.

Then my Grandma's health declined.

My Grandma had been my best friend since I was a little girl. I would visit her when she lived in Florida, and she would come out to stay with us for weeks at a time. I remember telling her, through a message written in Scrabble tiles, that I had started my period. She smiled at me and said, "Oh goodie, now you can give me great-grandchildren!" (I was 13. She was teasing. I think.)

When I was a rebellious teen, I would often stay with Grandma in her "tin can" house not far from my parents. We would get up early in the morning, make Taster's Choice coffee, and go watch Regis and Kathie Lee. If it was tennis season, we would watch Andre Agassi smoke the pants off his opponents, and she would tease me about my crush on him. She would make me tapioca pudding and microwave pizzas, and bring me warm things to calm my painful mouth after a visit to the orthodontist. We would sit out on her patio and people-watch, commenting on the awful clothing the other senior citizens would wear. On Sundays, I would accompany her to church, even though I felt out of place in that old building.

Grandma became weak and weary very quickly. She often told me that she'd had enough. The last time my boyfriend visited with her, she told him "I love you. Take care of my girl." It was like she was welcoming the end, and I couldn't really blame her. She had been through a lot in the last few years, emotionally and physically.

I was called by my dad one day, and he told me that Grandma had been put into hospice care. Within 24 hours or so, it became Crisis Care, which means that death was imminent. I took time off from school to be with my family, and we took turns sitting by her bedside. The hospice nurses were amazing, and spoke with all of us about anything and everything. They soon became a part of our family.

One afternoon, I was sitting by myself with Grandma, studying my Anatomy book. I was holding one of her hands. She wasn't really conscious at the time anymore, but I still felt her with me. I took a break from reading, and told her that I would be okay, that I had a great man in my life and that I wanted to marry him. Very slightly, she squeezed my hand.

It was early one afternoon, and Dad and I were sitting with Grandma. Suddenly, her breathing changed, and my heart stopped. The nurse put her hand on my shoulder, and said that it was close. Dad and I changed positions so that we were on either side of Grandma, each holding one of her hands. We spoke of memories while her breathing slowed. She took one more deep breath, then was still. I remember sitting there, waiting... waiting... waiting for another breath.

Nothing. She was gone.

I fell apart. My best friend was gone. I remember feeling the weight and warmth of the hospice nurse's hand on my back as I sobbed into my Grandmother's neck. I still cry now, remembering that day.

Turning around after I had calmed some, I saw the nurse was crying, too. And that, that moment, is when I felt my life change.

Two weeks later, I changed my major to nursing. I began volunteering for the same hospice program that had helped us so much. I remembered how the hospice program had treated my other grandmother back East, and that solidified my determination. I wanted to help families the way that we had been helped.

Hospice isn't just about dying. It's about helping patients and their families to really live during those precious last few moments. 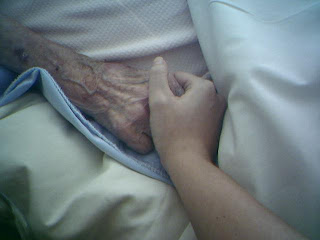 Holding hands for the last time.
(Me and Grandma)﻿
Posted by Unknown at 10:48 AM