Today will be a five-fer on the NaBloPoMo January challenge. Why? Because everything I want to say about all five questions is all mashed together and to try to separate them would be like untangling the Christmas lights if they got put into a giant hamster ball and rolled throughout the Grand Canyon.

[Side note: my cat just plopped herself down in a sunbeam and is looking at me like I’m her slave. Which, of course, I am.] 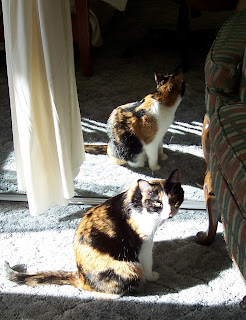 The theme for this particular day is – go ahead and laugh – me as a superhero.

I suppose every superhero has one or more hidden powers. I was watching “X-Men” last night, and thought it would be cool to be able to morph into any person I choose, like Mystique does. Being able to read minds is a breach of privacy, I think, but so is fooling someone into thinking you’re someone else. They tell you all their secrets, then you reveal yourself as someone else, then the crap hits the fan, and it's a huge big mess.

Flying like Superman would also be neat, except you might have those people who are late for work and always asking you for a ride. And flying wouldn’t really be hidden. Not many people are seen zooming over Interstate 5. And Spiderman has to deal with sticky spiderwebs all the time. I am not a graceful person and would probably get fired from my job because I trapped myself on the ceiling or something.

I loved Storm, who could whip up tornadoes and lightning bolts, and had gorgeous white hair and glowing eyes. I guess I would pick her powers, because you could rage as much as you had to, and it also could give me the chance to help out people who are struck by drought. Bring on the rain, yo. Also, it’s perfect, because I stormchase. Not like these people on television, but I have been known to go find thunderstorms just because I like them. I also made my way to the beach when I saw the line-up of waterspouts we had out here in 2007. (Yes. I was crazy. However, it was right after my grandmother had died and I was an emotional mess.)

If I had to choose between extreme strength or extreme speed, I would choose extreme speed. Why is this? Because I have never been able to run faster than a turtle who has gotten into the peyote. When playing softball, I would have to hit a triple to make it to first base. If vampires or zombies attack, you all are fine, because I’m going to be a tasty meal.

So because this whole month is about energy, of course a superhero needs a form of kryptonite. Rude neighbors are my kryptonite. If noise and chaos intrudes on my personal, private, awesome space, I get cranky. Cranky superheroes aren’t so super. I could always use my superior storm powers to fill the walls with storm-whipped sea foam and maybe it would hush it up a bit.

That leads us to what else I would do to save the world when I wake up tomorrow morning with these fabulous powers. I think our country has seen enough storms and flooding. Perfectly placed wind could help dry out those places, and other places could get rain. Lightning could start small fires for those who are in the middle of nowhere with no heat. Also, people could nestle down in the covers and read and have hot chocolate, and that makes the world calmer. Calm = less fighting = awesome.

So now I have to come up with a name for myself. “Storm” is taken. “Elektra” is taken. “Volt” is a staffing agency.

I just went into thesaurus.com and did a search for “electricity”: