In May of 2000, someone I considered a brother was taken from this World by a drunk driver. Manny and his new fiancee were driving to a family reunion. They never arrived. I received increasingly worried phone calls at work, wondering if we had heard from him or his fiancee. A couple of days later, another friend found me in my car - she told me that Manny was gone. It took so long for the news to get to us because they had to identify my friends by their dental records. That was the first time I really experienced death and loss, and it was someone very dear to me.

Manny and I immediately became close when he started working in my photo lab. He was nervous and silly and anxious that he would mess something up. Our female customers were charmed by his personality, and our male customers appreciated the respect that he showed to everyone. His smile lit up the room, and I did everything I could to get him to show it.

He came to me for advice on how to ask his girlfriend to marry him. He brought the ring to work, proudly and shyly showing it to our small group of friends. He called the lab after he proposed to her, excitedly detailing the story to me, and brought her in soon after so she could meet all of us. She was darling, and I could tell they adored each other. They were to be married not long after this reunion; he was going to introduce her to his (very large) extended family. How nervous he was!

Not long after he began working for me, he began calling me variations of Corinne. One morning, he strode into work and hollered, "Cori-ANDAH!!!" ... I can still hear him now. This new name became his favorite, and he called me that every time I saw him. Sometimes he would shorten it to Andie, which would confuse a lot of customers - we would giggle as we explained the nickname.

After Manny died, it took a long time for things to normalize around the lab and within my heart. I carried the prayer cards from his memorial in my wallet for a long time, and still have them somewhere safe. I still have his photo up on my bookcase - I often feel as if he winks down at me from time to time, as if he's saying he's okay. One day when I was setting up a new email account, I used Coriander without even thinking about it. I have used it in various forms ever since. It feels right.

So there you have it, my friends. And now, I would love to share my favorite picture of Manny with you. He will forever be my friend and a brother in my heart. 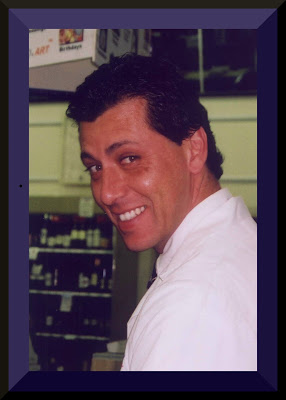